It brings a tear to my eye to sucker my 3 year old daughter to want a Super Mario cake.  Since she had a different answer everyday for what party she wanted I suggested the Galaxy cake since we were playing it on our second time through with Luigi.  After getting the 121st star I had her all suckered in :).

I had an extremely hard time deciding what to put on the cake.  If you've played the game you might understand.  There are so many levels its ridiculous.  I had to have the castle and one round world.  And for some reason I got bent on having the glass pill looking planet thing which I just thought would look cool on a cake.  The silver disc was an add on at the end of my decision so I could add Luigi and the spinning move specific to Galaxy.  Seriously, I had the worst time cutting out worlds I wanted on here.

Here are some sketches from planning.  Sketch 1  Sketch 2  Luigi and spinning mech (not used as drawn)  round world stuff  3D model  wood cutouts.  I made some scale drawings of the structure to make it faster since I started just a week and a half before the party.  I printed them to scale, glued them on the wood and cut away.  From there it went together fairly quickly with some modifications due to wiring actual motor sizes etc.  I grabbed as many decent pics of planets as I could find on internet without having to screen grab from my own game.  I was able to get very decent images without resorting to work.  Then I photoshopped the space background and added the planets and effects.  This is what I ended up with. I also photoshopped the spinning vortex and printed it on a transparency, you see that spinning in the background.

Here is my initial test for the spinning Luigi.  I didn't like the speed afterward so I put a higher RPM motor over the top of this motor later.  As you can see, the slow motor presses the button to close the circuit to make Luigi spin and also (though I don't have a video of it) presses the red spike guy up the disc which is yanked back by some elastic when the rod slides down the steep angle of the mech.  Second test video and one more picture.  Never did take the slow motor off, I figured it could be a backup if my speedy motor blew up or something.  The round world was a bit of a pain only because I couldn't fit the motors I wanted inside.  I had 1, 3, 6, 12, 30, 40 and 145 rpm motors available but the only speed I liked for Mario was the 12 which was of course the largest of them.  I decided to allow it to stick out and place the gun over top to camouflage it pic 1 pic 2 pic 3.  The other 2 motors were easy.  One straight to the star.  For the piranha plant, a generic linkage I made by smashing some sheet metal (back tab of a PC case) into a rotating lever arm (seen in the previous pictures, upper left).  By the original design, the pill planet was stationary.  Then by extreme chance I was looking for who knows what and found that I'd ordered an angled joint which would allow me to spin the table at an angle.  I had to do it.  It took an extra night's work but it was worth it.  I attached a lazy suzan to the table.  Then routed out the the pill bottom to allow rotation around the lazy suzan and some structure in the center of the lazy suzan for the joint to attach and spin the pill.  Once attached, the joint fit into the wood center.  This might be more complicated than it should be but I wanted that part hidden inside the structure and not 3" thick, once the foam was put over the top you couldn't see a thing.  To make the inside, we made six 6” dia by 2” thick molds of Rice Krispy treats, then cut those into 6”x1” giving us 12 to stack.  From there it was just stacking and cutting to make a playable level.  The fondant stuck really really really well to the rice krispies (go figure)  If you look you’ll see that it could be played if Mario were really there.  The star bits bouncing around under the castle rock were done with a previously created motor (Dinosaur babies).  It is just some bent metal with 3 small springs (doesn't have to be springs) some fishing line and fishing weights to keep tension so it doesn't tangle up.  The paper circles on the side also keep the line from crossing.  Here is a pic inside the castle rock which is under the castle.  You can see Bowser's motor there.  Very simple, motor goes round, Bowser rocks back and forth.  The vortex is a straight shaft from the printed transparency to the motor, though looking back I wish I'd grabbed a faster motor, this was too slow when compared to the game.

The characters, Mario, Luigi, Peach, Bowser were bought.  The rest are either fondant frosting or painted Sculpy clay (goombas, turtles, coins, piranha plant, red spinner, star, lumas, etc).  The star bits are shiny beads for necklaces.  The background was printed and attached to foamcore then scored and bent.  I couldn't find a way to fit Rosalina in there.  I had her from buying the character set but couldn't get her in the design.

Star bits (3 separate strands moving around under the castle rock)

There were 21 songs from the game playing from the mp3 player and speakers crammed in with the mass of wires in the base.  Luckily someone had posted the music on youtube already so I didn't have to rip them myself.  The songs were: Good Egg Galaxy, Gusty Garden, Buoy Base, Final Battle, Space Junk, Battlerock, Doomship, Ghostly, Drip Drop, Toy Time, Honeyhive, Beach Bowl, Dusty Dune, Bonefin, Purple Coins, Star Festival, Galaxy Gateway, Bowsers Reactor, Obstacle Course, Toy Robot and Comet Observatory.

My favorite part of the cake has to be the fiber optic shimmering lights in the background of space.  Not so easy to see in the video or pics but I thought that looked really neat.  I bought those cables years ago as a just in case I need them item, and here they are!  My second would be the bouncy star bits.

So what’s missing?  For sure a crystal with star bits in it.  Was planning to glass candy some but ran out of time.  I’d also a ring of star bits that Mario and Bullet Bill flew through, thought of that after the party of course.  I was planning a ring of star bits (rotating of course) in space but somehow forgot about that in the craziness of everything else.  Rosalina.  I also wouldn’t have minded a couple more characters in there somewhere moving around.

Here is the cake afterward, the party is all done.... 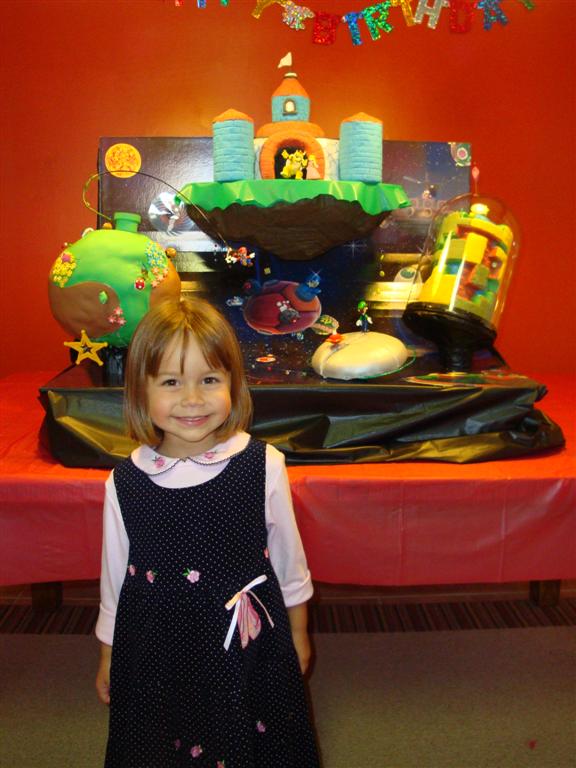 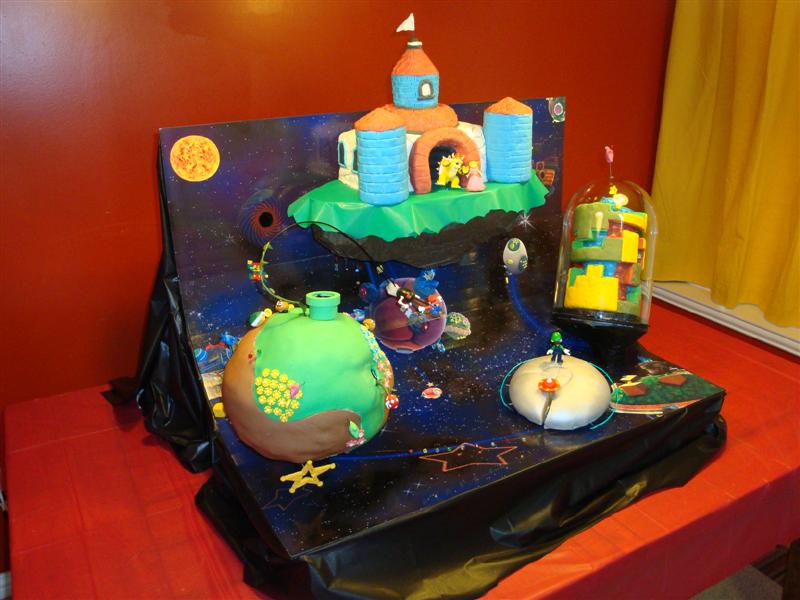 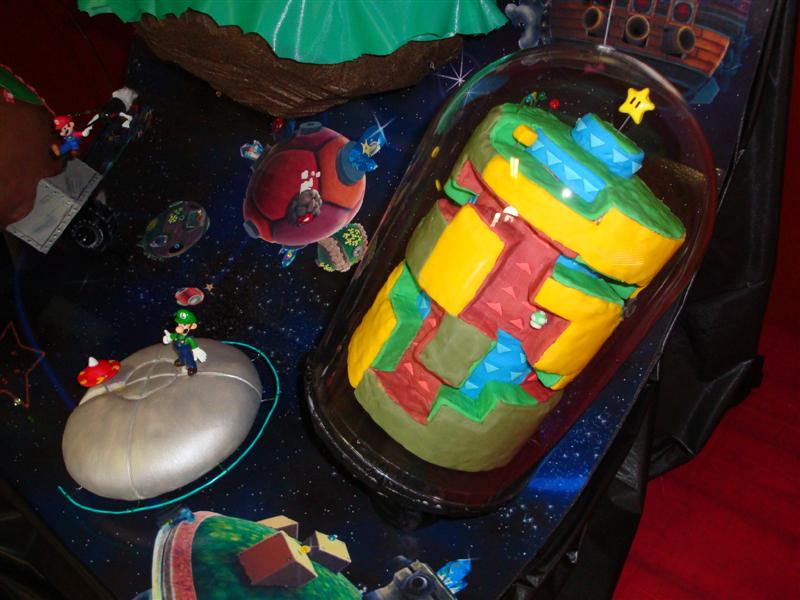 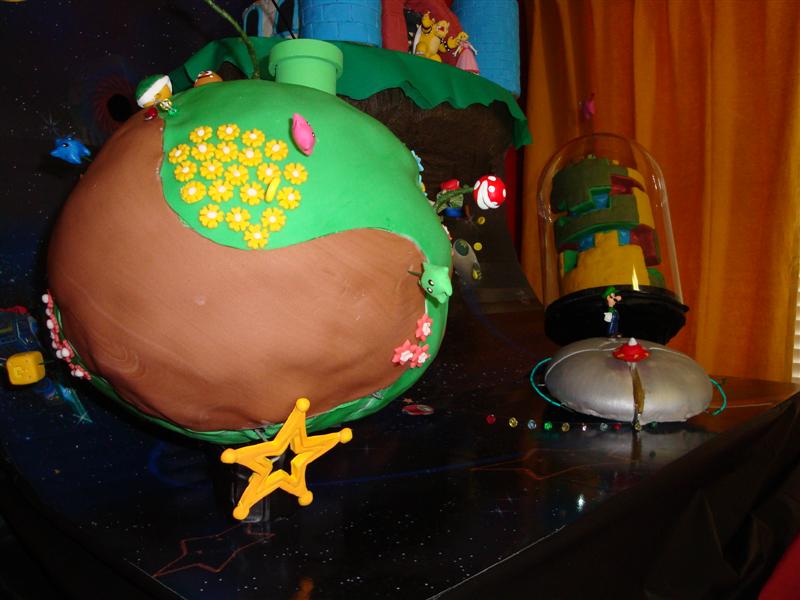 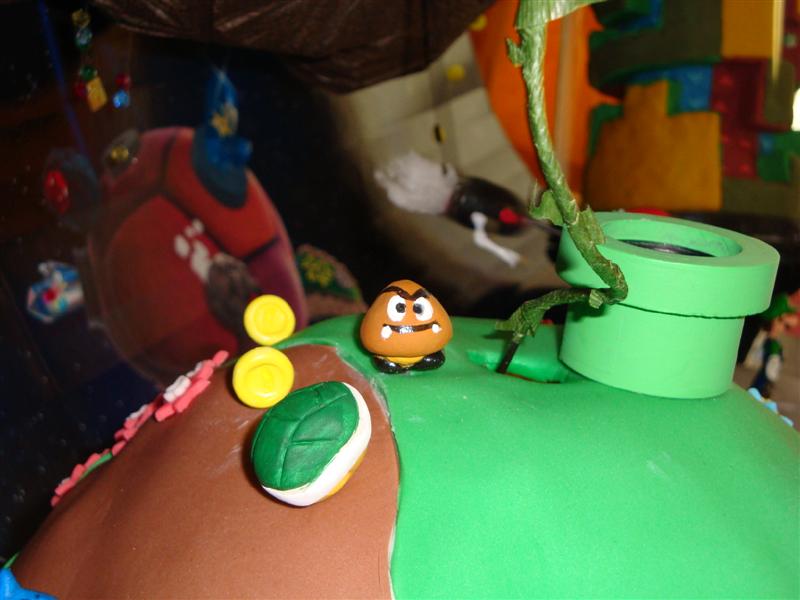 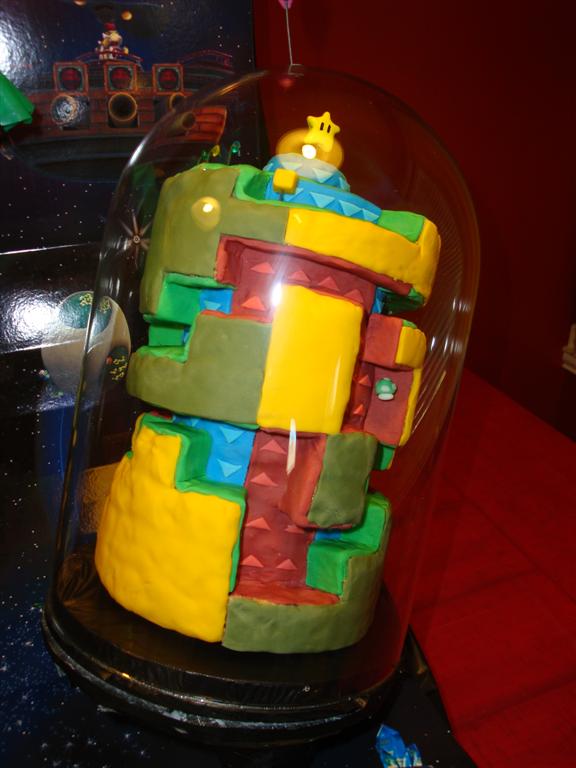 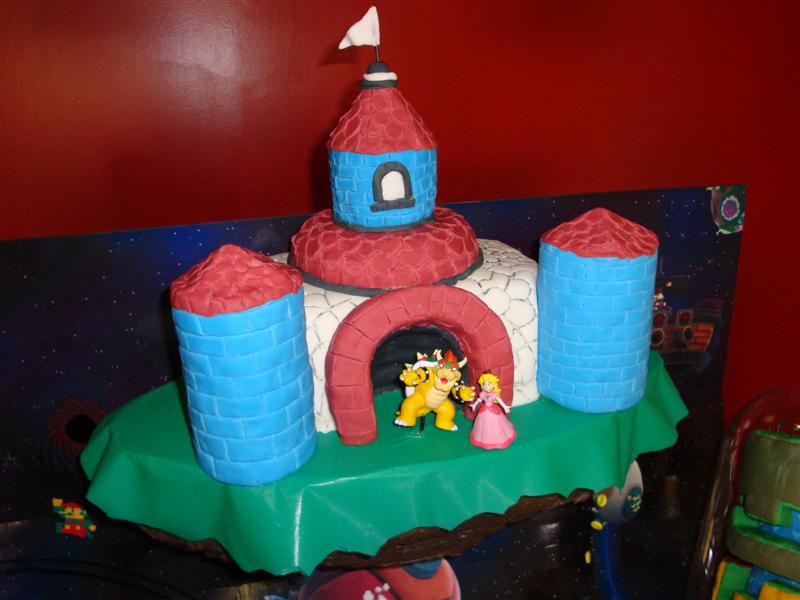 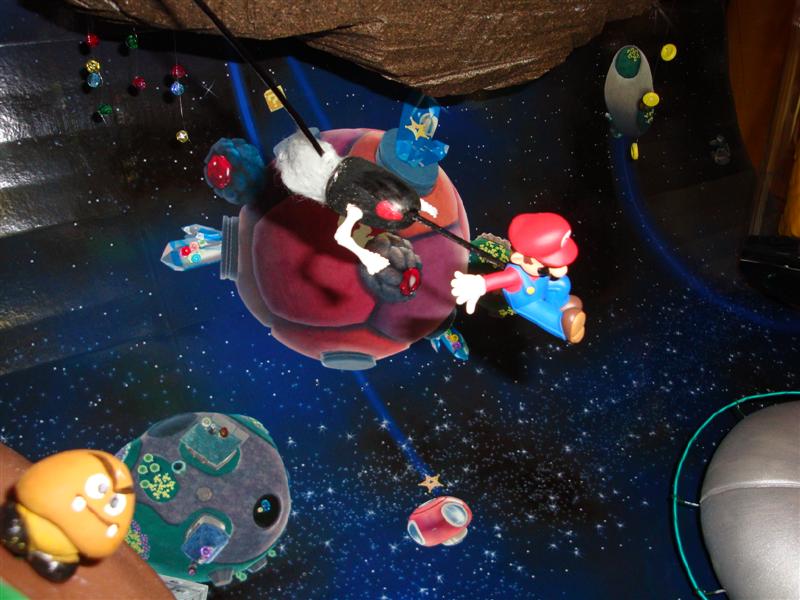 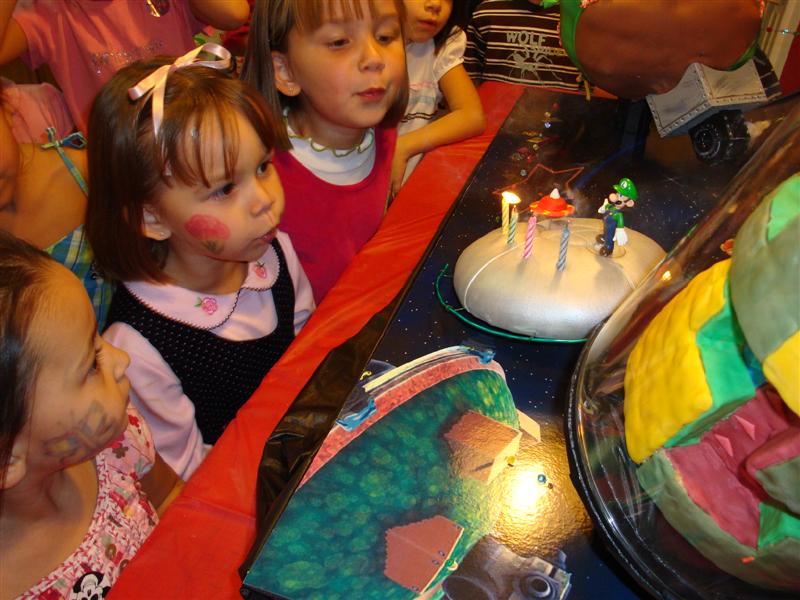 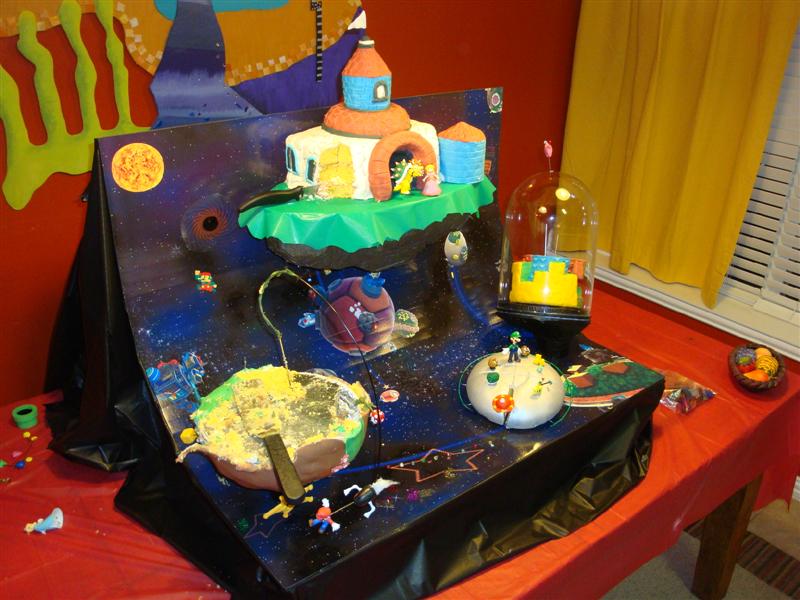